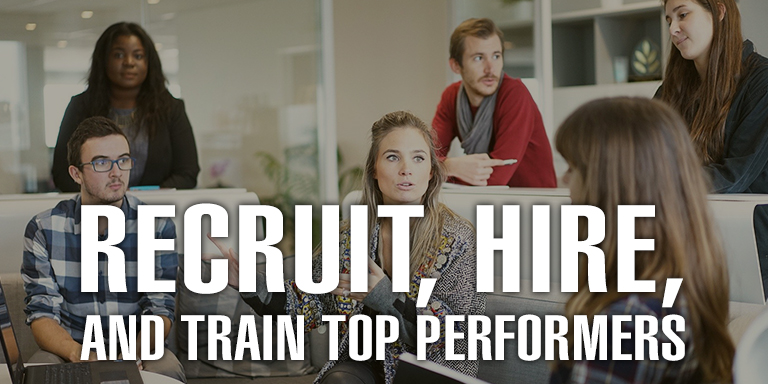 Technology helps you build a company bigger and faster, but ultimately it’s people that make your company grow. CEOs need to think of themselves as the head talent recruiter whose goal is to build the best team for their company. They cannot abdicate this responsibility to HR because Human Resources doesn’t really know what you want in your company.

So, how do you find top talent? Rick Crossland has been a high-level business strategist for years who trains CEOs on how to find and train A-players. Building an amazing team is his passion, so I sat down with him to talk about how I can continue to build a high-level business.

I’ve been an entrepreneur my whole life, and I think that there are a lot of misconceptions about hiring A-players. One of them is that they’re more expensive than a B or C player. And the second misconception is that an employer just needs the job done, and anybody can do it.

Rick defines an A team player, what they look like, and how to recognize them. He also shares what motivates an A-player (and surprisingly, it’s not always money), why you should turn the job interview on its head, and how to recruit top talent.

RECOGNIZE TOP TALENT BY TURNING THE JOB INTERVIEW AROUND

If you don’t know what an A-player is, then how do you know when you come across one in an interview? Many leaders don’t know what they’re looking for. Rick defines an A-player as an employee you would enthusiastically rehire. Ask any business owner who their best employees are and you can immediately see them sort through the mediocre guys and the ones they don’t want to let go in a downturn. Those top 10% are the A-players that you want to build an entire team from.

Start your hiring process from a reverse chronological order. Remove the bias from their resume and go back and look at their job progression. You’re looking for success in a job candidate’s past because every job should be progressively more successful and amazing.

Rick likes to interview with his entire executive team, so he can see from the beginning how a new employee might fit in with his “A” players. Getting everybody together can be a pain, but it helps the team to find a better match. Let the most junior “A” player speak first, cautions Rick. If you, as the CEO, give your opinion first, you won’t get the honesty you need from your team.

The interviews Rick holds are long, but they give his team time to really get to know an interviewee, and most importantly, they let the interviewee have time to unpack all of their accomplishments. Your interview should be able to show off a resume that looks like the highlight reel of a career, and you should go home so excited about having them join your team that you talk about it with your spouse over dinner.

HOW “A” GAME TALENT MEANS HAVING A SYSTEM IN PLACE

Here’s the thing: Top performers are the kind of employees that get excited about having a playbook. They want to know the steps they have to take to get to the next level. They’re not interested in confusing directions from the top and contradicting messages from management.

Having a system in place means you have a solid lock on the job descriptions within your company. It narrows down quickly what kind of new hire you’re looking for, and it means that you’re looking for someone who already knows how to do the tasks on your list. You’ll spend less time training them because they’ll already be prepared for the job.

If you have a system in place, you can hire A-players from other industries. Maybe you’re in the granite business, but your interviewee was in the lumber industry. They’ll have to learn a new system, but top performers don’t have a problem doing that. Your system clearly lays out for them what they need to catch up on and where they need to aim in their goals within your company.

Always recruiting for top talent means that you need to embrace your role as the chief talent recruiter for the company. Your job isn’t to be in the day-to-day operations. You need to create the vision for your company and then go out and find goal-driven A-players to execute your plan.

If you already have a system in place and you’re out there recruiting, then you might be looking at people that already have another job. Just like NCAA coaches who recruit two years out, you need to be thinking ahead too. Maybe you know someone through a friend, and they seem like they like their job. But in a year or two, they might be ready for their next challenge.

Once you’ve found the cream of the crop for your business, you may find that a small percentage of your team is always going to be in flux. Rick says that at a minimum, only about 10% of your team should be B-players. Too many low performers in your business drive away top talent, who hate being dragged down by C and D players. Those B-players though, they’ll still have a performance plan to level them up.

Is your onboarding a process that truly sets your employees up for success? If you go through all that effort to hire them, why would you stop at the end of the interview? Your onboarding should train them on your company culture, your company’s technology, and set them up for success. Immerse your new A-players in your company values, and if you’ve found the right new hire, they’ll gladly embrace your core values because they mirror their own.

There’s no shortage of talent to hire if you’ve built an amazing culture and you’re always on the lookout for talent. Step outside the daily grind of your business, and set up some systems that clearly define what kind of talent you’re looking for. Strategically plan for your business’s success by identifying, hiring, and training players that bring their A-game to the office.