5 Signs of a Housing Market Crash 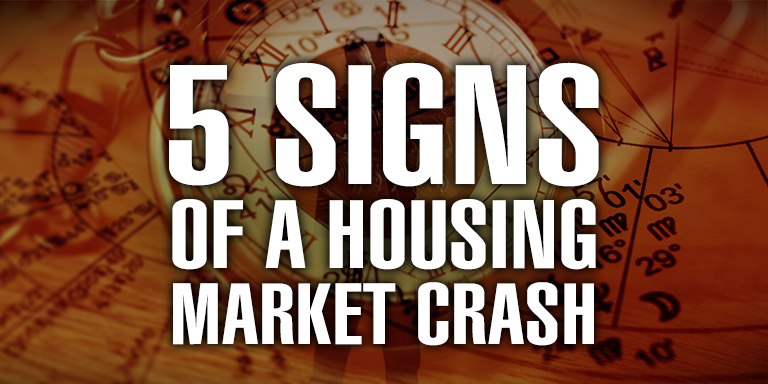 The question on everyone’s lips right now is, “Are we going to have another housing market crash?”. Rob Swanson is the CEO of Freedom Soft, which is one of the world’s best real estate automation tools. He’s been investing in real estate for 20 years, so he’s seen his fair share of changes in the market.

Rob keeps an eye on the indicators for a housing market crash because he lost $30 million in the ‘08, and as you can imagine, that hurt. Right now, he’s starting to see advertisements for those no document loans again that he saw before the last crash. The easy money liquidity is one of the key signs that floods the market before a crash, and it’s here today.

During the last crash, all of the old crusty chain-smoking hard money lender guys were telling Rob to buy and hold all of the cheap properties he could find, but Rob wanted to fix and flip them. He’d made money doing fix and flips before that, but what the old-time investors knew was that money in real estate isn’t made in fix and flips. The money is in the buy and hold strategy.

For the last few years, Rob’s been writing a book about how to predict the next crash, and these are the 5 signs he wants you to pay attention to in the next year.

There are three parts to a housing market crash. There’s that euphoric feeling that everyone gets that says, “This is going to keep going up forever”. Then comes the shock and fear when everyone realizes that we’re technically in a recession and they’re not sure if they’re prepared for it. And finally, there’s a little dip and then everything starts going back up again.

Before the last crash, the government pushed hard to open lending to more people by opening up the requirements for Freddie and Fannie loans. More FHA loans were given out in an attempt to make homes more affordable to people who wouldn’t usually qualify for a home loan. The availability of funding and financing drives up the values of home because they have more liquidity. As banks make it easier to get loans, then comes the second part.

As an active investor during ‘06-’08, Rob had an open line of credit at the bank that he was using to renovate his fix and flips. But as liquidity dried up in the banking world, his line of credit was closed down overnight and without warning.

There were signs of decreasing liquidity in the market, and this is one of the things Rob didn’t know to look for. This time, both of us prepared for this by holding onto more cash reserves and making and taking smaller loans. We’ve been preparing for that pivot because we know that if the stock market tanks and the bankers stop giving out loans, then we’d need our own funds to buy assets as the market started recovering.

BE AWARE OF THE BOOM/BUST MARKETS

Some markets are always going to be volatile. Yes, you can make money in places like Denver, Las Vegas, Seattle, and Miami, but if you haven’t bought for cash flow, you could also lose a lot of money when the prices drop 20%. That’s why Rob prefers to buy in more stable markets like Memphis, Louisville, and most of the Midwest. A house’s potential for appreciation doesn’t drive his decisions. In an upward trending market, that’s why he buys for a stable cash flow that can withstand a correction in the market.

A lot of my friends are buying with this same strategy in mind. They’re focusing on storage units, mobile home parks, single residents, or multi-families that are conservative in price and can cash flow within 30-60 days. They’re avoiding huge rehab projects that will tie up capital for 12- 18 months before they’ll see any sort of return.

This was even more apparent during the last crash when we moved from Bush to Obama. President Bush was all for creating more opportunity for people to buy a house, but ended up creating loose loan requirements. It inadvertently showed up as easy money. The transition to an Obama presidency triggered turmoil in the markets which led to the last sign of a housing market crash.

As banks try to create more of a cash cushion for themselves, they tighten up the lending requirements. It seems like lending stops entirely, but really it’s just that the requirements are more stringent. Suddenly a 620 credit score isn’t good enough, and banks will only loan to anyone above a 720.

Because banks aren’t loaning money to just anyone, people who might normally be trying to buy a home have to keep renting. Anyone who was in a gray area for maybe they could possibly buy a house have been completely shut out of the process.

Are you going to be flexible enough to shift when the market changes? Or do you rely too much on bank loans to get you through your next deal? It’s not too late to make some changes to your portfolio so that you can withstand the coming housing market crash. I’m not married to a strategy; I’m married to the pivot. Are you ready to pivot this year?