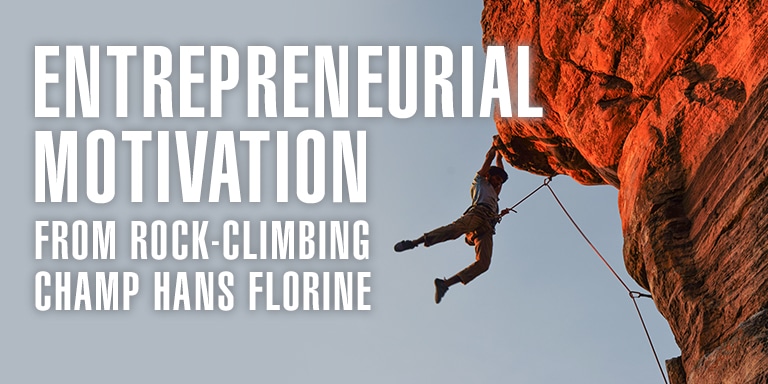 Which thought is scarier: climbing nearly 3,000 feet up the side of a mountain or quitting your stable job to start your own business?

The fact is: neither of these scenarios were unattainable to champion rock climber Hans Florine.

Hans has an impressive climbing resume, needless to say. He’s climbed El Capitan in Yosemite more than 150 times, plus The Nose (a well-known route that’s part of El Capitan) nearly 100 times. Hans also won many speed climbing awards in his career, including three gold medals in the X Games.

In recent years, Hans published On the Nose: A Lifelong Obsession with Yosemite’s Most Iconic Climb and began a career in motivational speaking and coaching.

I actually met Hans at The Capitalism Conference (CAPCON) earlier this year. Recently, I had the chance to chat with him about his accomplishments, and how he was able to overcome many struggles and setbacks during his illustrious climbing career.

Hans has a ton of great insight for entrepreneurs and business leaders, especially when it comes to achieving the highest level of performance in your professional life (while also enjoying a fulfilling personal life.)

So, to share the wealth, I want to pass on some of Hans’ most helpful tips and strategies for achieving peak performance and becoming the best version of yourself. Let’s take a look at the best advice I received from Hans…

It sounds cliché, but it’s 100% true… when it comes to achieving success, you need to start by finding what you’re passionate about (and what you’re good at).

Despite his success as a climber, Hans dabbled in many different sports until he found his niche. He tried bouldering (a different type of climbing) and then attempted to be a mountaineer – but he failed at both. After college, he went into the business world and became, as he says, a “yuppie,” just trying to succeed at corporate life.

But once he discovered that climbing was both his passion and his talent, he pursued that with all his energy and time – and the effort certainly paid off.

The morale of the story? You can’t excel at something you’re not passionate about or that you weren’t physically, mentally, or emotionally “built” to excel in. Find your strengths and pursue those.

When he was 25, Hans and his climbing partner, Mike Lopez, attempted to climb The Nose, which is nearly 3,000 feet high. Despite climbing for 14 hours, they didn’t reach the summit, and decided to repel down when darkness fell.

Although Hans perceived this experience as a failure, he came back to The Nose 20 years later, and climbed the entire height in record time.

So, despite being young, healthy, and strong in his 20s, he was unable to accomplish his goal. Yet, after 20 years of learning and facing his fears, Hans achieved his goal in his late 40s.

As an entrepreneur, real estate investor, or business owner, it’s imperative to face your fears. Never let age or ability be your excuse. If you want to succeed, you simply need the right mindset.

SIZE UP THE COMPETITION

Never be afraid to talk to the business owners or entrepreneurs that you’re competing with – as strange as that may sound.

For example, when Hans met climbers who had broken his speed record for climbing The Nose, he would ask them, point blank, “How did you do it?”

In most cases, his competitors would take a step back, stunned. And Hans would then say, “I want to beat you; I want to do better.”

Naturally, his competitors were caught off guard. But this was an important lesson that Hans has also used as an entrepreneur and businessperson.

He explains it like this: if you own a bakery, and there’s a competing bakery in your area that seems to be doing better business, approach the owner of that bakery and simply ask them how they’ve been so successful.

Will your competition always be willing to divulge their secrets? Of course not. But you’d be surprised how many people would be open to talking with you – just based on your confidence alone.

If that sounds absurd to you, here’s a more subtle tactic: learn from the experts in your industry. If you’re a real estate investor, listen to podcasts and enroll in coaching programs that are led by real estate investing experts. These are some of the best ways to learn their secrets. Then, use the information that is applicable to your specific business strategy and market. It’s as simple as that.

Almost all of the successful real estate investors and entrepreneurs that I know have taken every opportunity to be coached, mentored, and educated by others in their industry and have “given back” by serving as a coach or mentor for newer professionals in their field.

When I spoke with Hans, he agreed with this sentiment, saying that having a mastermind group or some type of accountability partner is a crucial part of every entrepreneur’s success story.

It’s one thing to tell yourself, “I’m going to invest in 12 properties this year” or “I’m going to open a second location for my business in the next 3 years” – and it’s an entirely different thing to discuss your goals with someone who can hold you accountable.

Find someone who is familiar with your industry or business strategy; make sure it’s someone you respect and trust. And ask them to hold you accountable to meeting your goals. You’d be amazed at the difference this will make for your business.

As a business owner or entrepreneur, you will never succeed if you don’t have unrelenting drive and determination. People who are easily discouraged by failure won’t make it as an entrepreneur.

Although Hans experienced many failures throughout his climbing career, he never gave up. And, once he reached his goal of climbing The Nose, he didn’t stop there.

Over the course of his career, he climbed The Nose 100 times. On separate occasions, he climbed it with the Oscar-winning actor Alex Honnold, climbing champion Lynn Hill, a blind person, and two children. (Random, I know!) And he has so many amazing stories to tell about these adventures in his book, On The Nose.

While Hans has many amazing qualities, the one that stood out to me the most was this: his determination to never give up. That’s not to say that he was never discouraged along his journey, but he never let those feelings get the best of him.

This resolve is also essential for every entrepreneur, business owner, real estate investor – or really anyone who wants to succeed in life. Keep your chin up, keep your eyes on the goal, and remember the reasons why you’re fighting to achieve your goals.

And, with time, you’ll reach the peak. I’m sure of it.