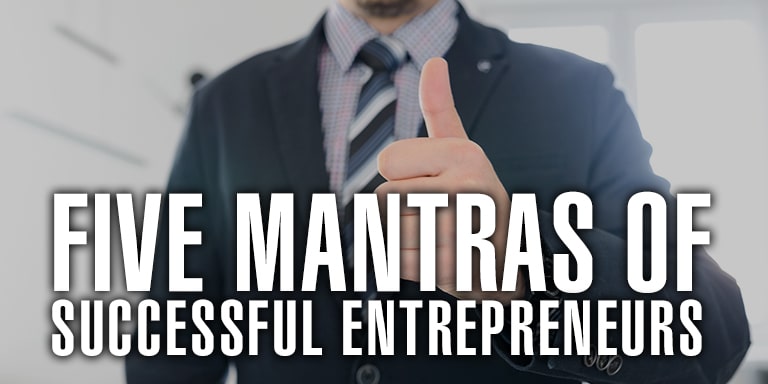 Do you ever wish someone would just hand you the secret key to success?

As a real estate investor, I’ve met my fair share of successful entrepreneurs, and I’ve become one myself. One thing I’ve realized after years in this business is that there really is a key to success. But it’s not a secret code. It’s not a button you press. It’s not a thing you do at all.

It’s the way you think.

Success is all about your mindset. And the right mindset centers on five truths every successful investor knows—and remembers daily. These truths shouldn’t just be words you say. They might start out that way, but over time they should become core beliefs, which should then become actions.

If you’re feeling stuck, it’s time to claim these truths and see how believing them and living them out can change your life.

First, live with no regrets. If you have a dream you should chase it, not push it aside. Otherwise at the end of your life you’ll look back and wonder what would have happened if you’d done the things that were in your heart to do.

A friend of mine, Keith, lost his mom 12 years ago. She told him on her deathbed that she had regrets. She hadn’t become who she wanted to become. She hadn’t done the things she’d wanted to do. And she told her son not to let that happen to him.

After that conversation, Keith did something he’d been too scared to do before—he started up his real estate business. And it’s been a huge success.

So whether you really want to get back in shape, you’re looking to build your business to eight figures, or you want to be a stand-up comedian, try. Otherwise you’re going to regret it.

Of course it’s not going to be easy. It’s a battle to realize your dreams. But there’s also always joy at the end of the road. When you do what’s in your heart to do, whether you win, lose, or draw, at least you tried. I would rather have the trophy of trying and failing than having the trophy of regret.

#2: BE HONEST WITH YOURSELF

In order to live with no regrets, you need to know what it is that you really want. And to do that you need to be brutally honest with yourself about what you have—and don’t have—right now.

Maybe you’ve been saying you started as a real estate investor because you just want to make a little extra cash, when in reality you’re struggling to make your rent. Call that what it really is.

Maybe you’ve been saying you just need to lose 10 pounds when you’re 70 pounds overweight. Stop lying to yourself and admit that where you’re at is unacceptable.

Quit minimizing and be honest.

If you’re starting to feel bored with your life, figure out the root of the problem. Look at your life honestly and critically. If you can do that and figure out how to fix the root issue, you’ll get back to your optimum performance.

I started to feel that way recently and I realized the problem was drinking more than I needed to and not going to bed early enough. Now that I’ve changed those habits, I’m able to start my day at 5 am again and I’m back to feeling passionate about what I do.

The third mantra of the successful entrepreneur mindset is to live without fear. But before you can start living without fear, you need to define what you’re afraid of.

So many people are afraid of what others will think and say about them if they fail or if they’re not the very best at what they do. Your first attempt at something should be a real attempt, not just a test to see if anyone is going to make fun of your mistakes.

So what’s the worst case scenario? It’s the judgment of others. It’s not bankruptcy, failing, or losing money. And how do you tackle that? Own the situation. There’s nothing wrong with admitting you tried, you followed all the steps, and you didn’t get it right. And admitting that takes the power from people who might judge you and puts it back in your hands.

Fourth, it’s time to get focused. Focus on what you want and push everything else away.

If you’re not sure whether you’re doing everything you can to realize your dreams, take a look at your calendar; that will tell you exactly what your values are.

If your family is important to you, you should be spending time with them. And if you’re not, then your family really isn’t your priority. Saying you’re too busy is just an excuse. There’s always a way to make it happen. If you want to be done working at 5 pm, get up earlier. And while you’re working, stay focused. It’s incredible how much more you can get done on a tight deadline.

Ultimately, my favorite player’s stats didn’t matter. Flipping my first property and putting $20,000 in my pocket mattered. From there, I grew my confidence and grew my business.

We’re no here very long, so if you want to get something done then schedule it and do it. It’s on you to make it happen.

Lastly, don’t be afraid of hard work. So many people are asking this question: what is the minimal amount of effort I can put in and still get the maximum result?

Yes, we want to maximize productivity and use technology and train great staff. You should delegate and do the kinds of work that you enjoy. But if your mindset is to avoid work as much as possible, you’ll never get where you want to go.

The bottom line is that people don’t know where they can go because they don’t put in the effort to get there. Successful investors work hard—and they keep working hard. So give everything you do your all.

TAKE BACK YOUR LIFE

With these five mantras, you can take back your life. Name your dreams, get focused, and work hard, and you’ll be able to claim results. Those results won’t always be dollars or deals, but you are guaranteed one result: if you go after what’s in your heart, you will live with no regrets.

What’s your mantra? Give me a shout out below.