Market Trends and Predictions for 2020 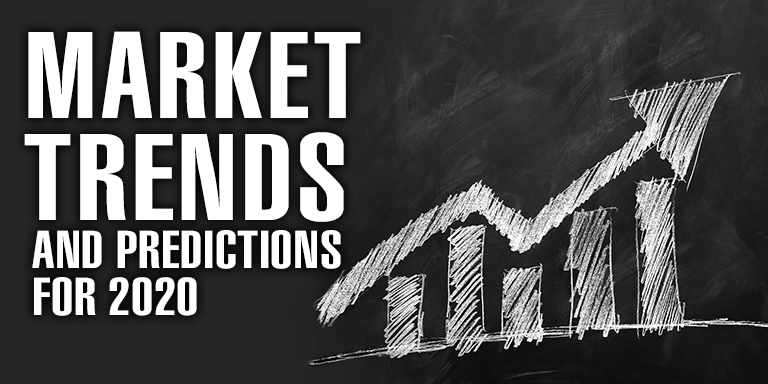 Once a quarter I like to check in with Daren Blomquist, the vice president of Market Economics at Auction.com about the state of the real estate market. Moving beyond gut feelings and internet chat boards, Daren uses hard data his company collects to show us where the market’s been so that we can better predict where the market might go next. By looking at the yield curve, manufacturing index, consumer sentiment, unemployment rate, and foreclosure starts, Daren explained the trends he’s seeing in Q4 of 2019.

SELL WHILE THE SUN STILL SHINES

If you’ve been holding on to inventory for any reason, now is the time to sell, stresses Daren. There’s a strong demand for inventory, and many of the real estate investors who have an appetite for foreclosed homes haven’t slowed down at all.

The issue facing the distressed market is supply. There just aren’t a lot of deals out there, and I’m sure many of you are finding this to be true too. Even with foreclosures, fewer of them are making it all of the way through the process. Banks have been stopping foreclosures, which has continued to hold the supply down.

There will always be the 4 Ds of real estate: death, disability, divorce, and distress. On the other hand, Daren’s just not seeing the same volume of foreclosed houses that we used to have. The spike in 2017-18 was driven by natural disasters, so for the most part, foreclosures are a shadow of what they were in 2009.

Days on the market are up, while median prices continue to rise. Daren sees some cooling in markets like California and Florida, and Nevada, which is traditionally a bellwether market, has seen the biggest increase in days on the market year over year.

MARKETS TO KEEP YOUR EYE ON

We hear anecdotally about people leaving California and fleeing for cheaper parts of the country, so some of Daren’s net migration data should not surprise you. Some of the tax benefits in more expensive states were taken away, so that is having an effect on states like New Jersey, New York, Illinois, and of course California. In addition, anti-flipping laws, rent control, and anti-investor sentiment in these states are chilling real estate investors’ interest in these areas.

So where are people moving to? Arizona, Texas, the Southeast, the Midwest, and Florida are attractive markets for those looking to escape being priced out of their own markets. Even Boise, Idaho is enjoying some of the net migration out of expensive markets. While everyone enjoys housing appreciation, people tend to leave areas that just cost too much money to live in.

By drilling down to a county-by-county look at where people are moving to and from, Daren can see that prices are going down in some places in California like Santa Clara County and San Mateo County. Between the net migration and the cooling of the housing prices, he sees a little weakness in the current California market.

WHAT BANKS ARE SAYING ABOUT THE REAL ESTATE MARKET

Daren surveyed his clients that have foreclosure inventory in December 2019 to get an idea of where they predict the market to move to. He asked them if they thought foreclosures would increase, and where they thought that shift would come from.

More than two thirds of Daren’s clients, who together make up 87% of the servicing volume for this industry, predicted that foreclosures would increase. 60% of them said it would only increase slightly, and 6% of them thought it would increase substantially for the year.

As Daren suspected, government insured loans are predicted to be the biggest source of additional inventory. Over the last few years, FHA loans have become some of the riskiest loans in the marketplace with the low or no down payment options. You can get a rural VA loan with 100% financing.

And while it’s a great deal for veterans, Daren’s seeing the inflow data increase in this area. The FHA’s own data lags a little behind real time, but in November 2019, they were reporting 90 day delinquencies up 3%, and 60 day delinquencies up 16%. So I’d keep an eye on those numbers going forward.

THE FUNDAMENTALS OF REAL ESTATE ARE THE SAME

Don’t get desperate to buy a deal and overpay. I understand that you might want to move into a market, but paying 80-90 cents on the dollar and hoping for appreciation is going to catch you. There is some weakness in certain markets, so understanding the local nature of the market you’re investing in will give you a cash flowing property that can weather any downturn. The fundamentals of investing remain the same: leave yourself enough cash flow to pay down your debt service during a recession.

Daren’s data showed us that there isn’t blood in the streets and that the next six months look pretty stable. If you’re in one of those pretty stable markets, I wouldn’t continue to keep my cash on the sidelines because I just don’t see a crash coming any time soon. Remember that it takes months and months for foreclosures and distressed properties to work their way through the snake.

Investors need to keep an eye on the data to make sure they’re prepared in case the market starts to shift. In nearly every market correction, investors were ahead of the data as they pulled back on buying homes right before a crash. Sticking close to the numbers from a place like Auction.com can help you make informed decisions. And if you’re seeing prices rise and you can’t find any deals, start expanding your marketing or your market.