Scale Up for the 2021 Housing Market 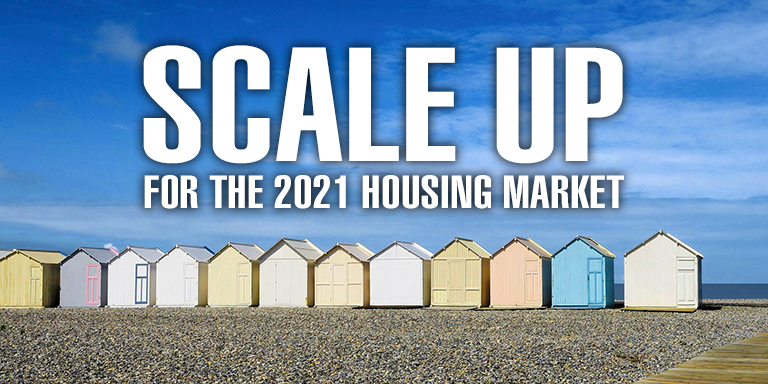 Lee Kearney has closed 7,000 deals in the last 15 years. He often closes 30-50 deals in a month or over 300-600 deals a year, and his ability to scale is a beautiful thing to behold. Because his team’s processes and systems are laid out so clearly, with clearly delineated roles, Lee can dial up the work they do when the market looks like it’s hot.

Shutdowns, historic unemployment, and the Covid-19 pandemic have disrupted the foreclosure pipeline, and have pushed a lot of people into pre-foreclosure. The 2021 housing market will have significantly more inventory as things start to move through the courts again. Using Lee’s strategies, I’m going to lay out how you can scale up to prepare for this opportunity, and where I see the opportunities happening in the next year.

HOW YOU CAN SCALE UP

Create a Team
Lee’s underwriters do only one thing: they underwrite. They get really, really good at underwriting and if they ever leave, there’s no business risk. Their hyper focus on one area of the business means that they’ll write tens of thousands of loans, but replacing them means finding another underwriter. It won’t disrupt his entire team because each task is so compartmentalized.

Lee’s processing team and disposition team are separate from each other, but both are overseen by his accounting team. Each team stays in their own lane focusing on the system that Lee’s set up for them, and that lets them stay on top of their emails and tasks.

Build a System
In 2013, when Lee’s company did 2,000 transactions in one year, they worked entirely off of Google docs. People spend money on fancy CRMs, but they overcomplicate how many steps their employees need to walk through. If twelve steps can be reduced down to one or two, then they should be. If you want consistency in your workflow, then you need to create a system that can go into a Google doc and be executed by anyone on your team.

Use the Right Tools
With so many people working from home, Lee is dealing with the same tricky balance that many business owners are working through. Don’t toss a laptop at your virtual staff and hope that they’ll produce the same quality of work that they did in the office. Lee invested in more screens and faster internet for his employees. For the $500-1,000 that he invested in equipment, his employees can continue to produce at rockstar levels. Don’t handicap your team by ignoring the tools they need to get their job done.

Make That First Hire
If you’re at the very beginning stages of building a team, that first hire is hugely important. An executive assistant will cost you between $40,000-75,000, but they’ll be worth it because they’re going to be your right hand man or woman. As you go through your week, you’ll want to write down every task you do that doesn’t make you any money. Essentially, you’re writing down what your assistant’s job description is going to be as you offload the work that you do that isn’t absolutely necessary for you to do anymore.

WHY YOU NEED TO SCALE UP

Comparing right now to the Great Recession, Lee sees what’s happening now as a parallel to ‘06. Things are just getting warmed up and we’re not 100% sure where the housing market will end up, but we’re definitely at the beginning of something big. And Lee does have some predictions for 2021 based on what he can see right now.

Distressed Sellers & Unemployed Buyers
The primary seller right now is the distressed seller because they’ve lost their jobs and they’re rapidly losing the equity on their homes as they stop paying on their mortgage. They need to sell their home before the amount they owe and their equity cross each other and they’re suddenly upside down on a house. Whether banks choose to tack the forbearance period onto the back of a mortgage may have a bearing on how many homeowners get into this situation, but for now Lee foresees a lot more distressed sellers headed to the market.

In addition, for the next year, anyone who’s been unemployed this year is going to get knocked out of the buying pool. That gap in the employment will disqualify them for a bank loan, so even though foreclosures will flood the market, a large chunk of potential buyers will be sitting on the sidelines.

While trustee states might prefer to rip off the band-aid quickly and get all of the foreclosures over as soon as possible, a judicial state will drag the process out as foreclosures work themselves slowly through the courts. All real estate is local, so the market in California will look very different from the market in Florida or Indiana. What’s important is focusing on the kind of houses you’re investing in.

Lee prefers class C homes in working class neighborhoods because at the end of a cycle they get pulled up by the higher priced assets that nobody can afford. But they’re still in decent areas that people want to live in.

When the market hits the bottom, it’s going to bounce off the bottom for two or three years. That’s enough time for you to pull a real estate team together, scale up your business, and prepare to invest in the homes that are coming to the market in 2021.

When the market hits the bottom, it’s going to bounce off the bottom for two or three years. That’s enough time for you to pull a real estate team together, scale up your business, and prepare to invest in the homes that are coming to the market in 2021.