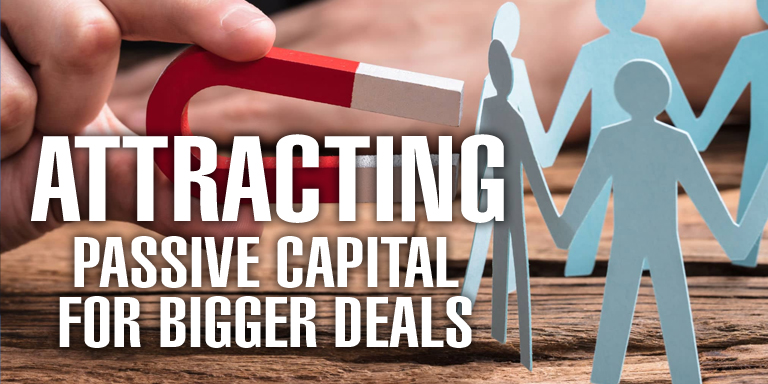 Adam Adams, better known as “Triple A”, has raised funds for 7 multifamily syndication deals, and he has over $100 million in real estate. He’s also built an amazing leadership platform where he can reach a massive audience who are hungry to hear about how to raise capital and passively invest in real estate.

Adam’s podcast Creative Real Estate Podcast was in the top 1% of all downloaded podcasts on iTunes before he sold it. But he noticed that no one listened to his podcast unless he told them what he was doing on social media. There was this direct relationship between his social media posts and the growth of his podcast. Because let’s be honest, how many times do you find yourself scrolling through iTunes looking for a new podcast to listen to? That’s just not how it works.

Every investor Adam sees crushing it follows the same three pillars for engagement that build the kind of trust and credibility that you need to raise capital for passive multifamily investments.

In fact, these are the exact same pillars that I follow, and I promise you that they will build you the kind of reputation that will help you raise huge amounts of capital for multifamily syndications.

The first, and most important, pillar is social media. Because if you don’t have a robust social media presence, no one will even know about the two other pillars that you’re trying to set up. All of your trust building starts with a social media account.

The temptation might be there to be the shiniest, nicest version of yourself on social media. But you don’t need to hide who you are and what you love. If you love mountain biking or wine, talk about that. People will connect with you when they have similar interests to you, and because you’re interesting. You’re a relatable person, and they’ll keep coming back for more engagement.

If it just so happens that you’re a person that loves wine and investing in assisted living facilities, cool. You’ll eventually connect with an audience that loves that too. Adam started with building a Facebook following, and then he’d post his podcast episodes on Facebook and funnel his fans to iTunes. That’s one of the ways he built up his podcast following and grew his thought leader platform.

I love the podcasting platform because it’s an opportunity for me to meet interesting people. And I’m going to be honest and tell you that sometimes I invite guests on for the purely selfish reason that I want to learn from them and partner with them. It’s just an added bonus that my audience gets to hear some of the awesome strategies and stories that my guests share with me.

You might prefer a different thought platform like YouTube or even the old-fashioned route of writing a book, and that’s totally cool. The purpose of a thought platform is to have your potential followers talking about you when you’re not in the room. You want them to say things like, “Have you heard about Adam Adams’ five step to raise capital?”, or “Did you listen to the podcast about starting your own meet-up?”.

Adam was able to build his thought leadership platform out to where he could host his Raising Money Summit virtually and have 1,000 people sign up to come. To a virtual event! That’s a testament to the kind of community he’s created around his personal brand. That’s how powerful social media and a thought leader platform can be when they’re linked together.

Investors like doing business with people they know, like and trust. Think of social media as if it’s the “like” part, and the thought leader platform is the “know” portion. Face-to-face meetings are the best way to get someone to “trust” you. It could be a dinner together, or just a local REIA meet-up, but either way, that in person event is going to help an investor get to know and trust the core you.

Before COVID, I would do two in person events a year where I’d get up on the stage and just spend some time educating my audience. We’ve all had to adapt, but that doesn’t mean in person events aren’t possible anymore. I’m still using webinars and Zoom meetings to connect and educate my investors. And Adam is hosting massive virtual summits with break out rooms so that investors have a chance to network with each other.

I know from experience that when I’m up there educating on the stage, it’s a great chance for passive investors to see me in my element and make that decision to jump into my next deal with both feet. And when I have their trust, I take that responsibility very seriously.

When COVID hit, Adam was putting the finishing touches on a deal in Oklahoma. He’d raised $6 million, and he’d already put down $185,000 of earnest money, but he kept getting what he called “the heebie-jeebies”. That’s that feeling that you just know something is off and you don’t want to keep going forward. Adam had a company policy to “do the right thing even if it hurts”. And at this moment, pulling out of a great deal was going to cost him real money.

Building out your network for cap raises can take some work. If you’d like a mentor to guide you through that process, we’d love to help you. Contact us at JoshCantwellCoaching.com for personal coaching that will explode your real estate business.

Listen to the full episode here.