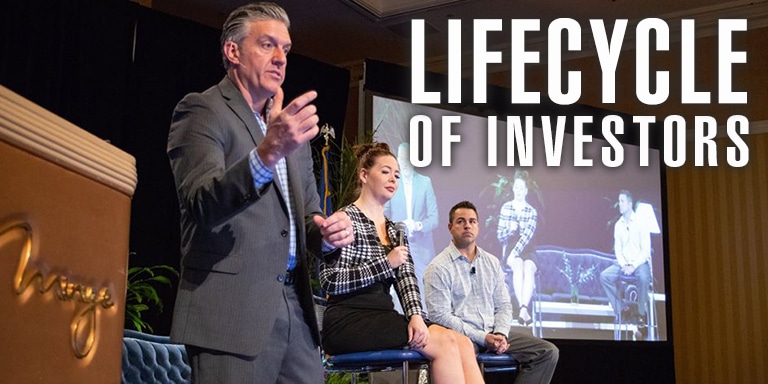 Building a successful real estate investing (REI) business is a marathon—not a sprint.

You’d be hard pressed to find a real estate investor who became successful overnight. It takes days, weeks, months, and usually years of hard work to grow a business that brings you the financial freedom you’re hoping for.

On the bright side: once you have established a financially-stable REI business, it gets a little bit easier to maintain it.

If you’re just starting out in the biz, or even if you have years of experience under your belt, it’s always helpful to seek advice from other investors on what has worked well for them.

That’s why I’ve gathered some insight from a few of our SREC coaches for your consumption. (You’re welcome!)

Kyle Garifo, Chris Seder, and DK Kim are all successful real estate investors, but their professional backgrounds, current REI business models, markets, and strategies are not the same. One thing they do have in common, though, is their ability to give on-point advice for investors.

Between the three of them, they’ve done hundreds (if not thousands) of rehabs, wholesale deals, multi-unit properties, rental properties, and more. Regardless of your business goals, you’ll find that they each have something valuable to say.

In his previous career, Kyle was a well-respected and successful clinical therapist. He was able to build up a solid client base and enjoyed his job, for the most part. He struggled with the hours, though… working evenings and weekends meant that he had limited time with his young kids.

His interest in real estate investing was sparked in 2007, especially when he considered that a career in REI would allow him to spend more time with his family. At that time, lots of people were doing short sales, so Kyle purchased an REO and started the rehab process. It took him nearly nine months to complete the work (which he did entirely on his own), and he made a measly $1,200 when all was said and done. Let’s just say, his wife wasn’t too ecstatic.

But through this experience, Kyle learned that he loved the business. He became my student in 2011 and, in an effort to build an evergreen business model, he decided to focus primarily on rehabs instead of short sales.

Today, he still does single-family flips, but he also works on condo developments, multi-unit properties, and residential assisted living developments in the northwestern Chicago suburbs.

What he did WELL on his journey: One of Kyle’s strengths as a real estate investor is his willingness to take risks. He believes that all investors not only need to take risks, but they also need to be willing to fail. Obviously, you shouldn’t make reckless decisions. But, with a solid understanding of your market and your own business, you should be open to taking the right risks. And if you fail? You learn from your mistakes and try again.

CHRIS: IT’S ALL IN THE FAMILY

Chris’ career as an investor started right out of college in 2009, when he went to work with his dad, a real estate broker and investor. His first investment property was a single-family rehab that he used as a rental.

Looking back, one thing Chris wishes he would have done differently at the beginning of his REI journey was to do more research on finding deals. At the time, he was mainly using the MLS and his dad as resources, but once he discovered and mastered direct mail and other marketing techniques, his business really boomed.

Now, Chris’ main focus is rehabbing about 10-12 properties (mainly rentals) every year in the greater Billings, Montana market. Together, he and his dad own upwards of 130 units. With the passive income he earns from these rentals, Chris can cover his living expenses AND take plenty of time off work to enjoy one of his main passions—golf.

What he did WELL on his journey: When he started his REI business, Chris put a TON of energy and time into it. He also made sure he had time for education and expanding his knowledge of the industry. Many of his fellow investors who he saw succeeding were also putting an incredible amount of effort into their businesses. The reward is this: after the first few years, you start to master your craft and it gets a little less time-consuming. But you have to be willing to put in the long hours at first!

DK KIM: LAYING DOWN THE LAW AND PICKING UP REI

Before he got into real estate investing, DK had an impressive career as an immigration attorney. While the job and the income were both stable, he wasn’t feeling professionally fulfilled. His clients would often blow off their appointments with him, leaving DK to wonder if his passion for helping these individuals was misplaced.

DK was interested in real estate but was hesitant to pursue investing full-time. He worried that it wouldn’t pay the bills and that he’d have to work 70+ hours a week. But, in the end, he decided to take his own advice that he had given to his legal clients many times: “Just go out and execute!” So, in 2012, he left behind his legal career to devote his time to REI.

Now he says that jumping into REI was the best decision he ever made. Based in Orlando, DK invests in apartment developments, single-family rehabs, new construction single-family homes, and more. He’s also recently started brokering commercial real estate deals.

What he did WELL on his journey: Even in the early years of his business, DK was persistent when it came to securing financing from private lenders. He had about 15 or 16 rejections from potential private lenders before he got his first “yes.” Sometime around rejection #5, DK got discouraged, but he kept going. He sees this now as a common problem with many of the REI students he coaches—they’re so scared of rejection from private lenders. But, as he tells them, all you need to do is literally communicate your business goals. If someone says “no,” it’s not the end of the world!

All three of these guys have amazing REI businesses and they’ve really excelled in this industry. But they’re not perfect, and they’ve made mistakes along the way. You will too. The important thing is to be persistent, be open to new ideas and education, and be firmly committed to your business goals. If all of these are in place, success will follow easily.