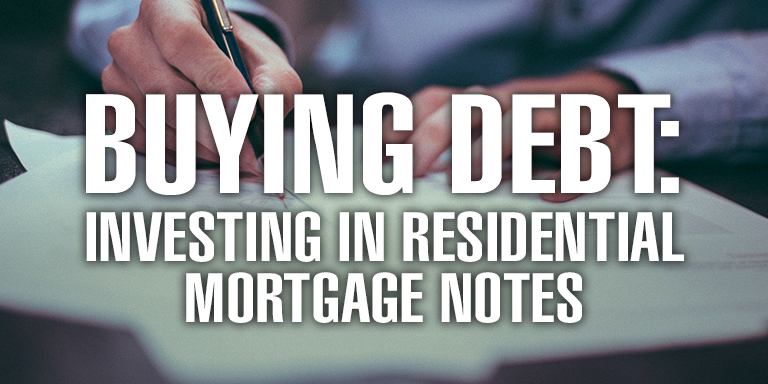 After losing everything in 2000, Bob Fraser from Aspen Funds started looking around for a better real estate strategy. When he met his partner, who’d lost everything in 2008, they had enough experience to know that when they lost everything, it all returned to the hard money lender. That’s when their big idea hit them like a two by four: It was time to get on the debt side of the equation.

Today Bob buys both performing and non-performing mortgage notes from hedge funds or note brokers who specialize in them. He currently has over 2,000 mortgage notes in his portfolio. When liquidity disappears from the market and foreclosures increase, banks are looking to offload their non-performing debt, and that’s when Bob and his company step in. They buy loans that were at one time defaulted and are then restructured or modified.

For performing notes, he collects their cash flows, and for non-performing notes, he repairs them. Bob’s debt buying strategy might seem risky, but he and his partner have carefully analyzed the best way to minimize their risk. Bob’s been through four crashes, including the S&L crisis in the ‘90s, so he has some awesome accumulated wisdom about how to navigate through uncertain economic times.

BULLETPROOF YOUR PORTFOLIO WITH DEBT

Economic turmoil is creating a lot of opportunity in the real estate market, especially the note buying market. As banks see an increase in defaulted notes, they want to get those off their books. Once a bank note goes into the non-accrual status, it means that a bank has to write the debt down to zero. Even if a note is restructured and starts performing again, it’s still considered trash.

If a bank has liquidity concerns, which happens often in crises, then they want to sell off those notes and inject some capital back into their books. Bob says that everyone is always waiting for the next crash to be like the last crash. But that’s not how it works. You cannot predict what will trigger a crash or how the chips will fall. No matter what shape a crash takes, you can guarantee that banks will need liquidity and that debt will always be hanging around.

Bob and his partner have a very unique underwriting system. They calculate how much money a property would make if it were to rent versus how much principal and interest are being paid to them. It’s not a debt service coverage ratio that they’re looking at, but actually figuring out if it’s cheaper to own or rent the property. They only purchase a property if the rent is quite a bit higher than the principal and interest. And when Bob says significantly higher rent, he means 25%, 30%, or even 50% higher than principal and interest. Because he can only get those kinds of figures in certain parts of the country, he’s chosen to move a lot of his portfolio into bread-and-butter markets in the Midwest.

Investing in mortgage notes works like this: Based off of the unpaid principal balance, there’s a certain yield on that note. And because you’re buying that note at some sort of discount, you’re jacking up that yield. I know some of you are wondering, “If a performing residential owner occupied loan only has a 5 percent rate, how am I going to make money on that?”.

The difference is, a company like Bob’s acquires those notes at a significant discount, but they’re still getting the 5% yield off the unpaid principal balance. Because they buy at a discount, when that loan is sold or refinanced, they recover that discount and end up with capital gains.

All day long, Bob prefers buying second mortgages over first mortgages for a very specific reason. When the discounts on the second notes are around 30%, 40%, 50%, you’re almost always guaranteed a larger spread. In an unlikely crash scenario, you still end up with 30% equity in a property. For example, say a second note is purchased for $50,000, but it’s worth $100,000. If the original owner sells or refinances his home, the holder of the second note makes $100,000, or a 100% return on his money.

HOW TO GET THROUGH UNCERTAIN ECONOMIC TIMES

As the market starts to soften, Bob’s not worried about a housing crash like we saw back in 2008. The fundamentals remain solid, and we’re just not seeing the same kind of speculation that drove the last market crash this time around. Single family structures relative to the population are the lowest amount that they’ve been in 60 years. This underdevelopment of single family housing will protect the housing economy as we move through this recession because there simply aren’t enough houses for people to live in. Housing scarcity will protect this market in a way that we didn’t see the last time.

There are going to be businesses and entrepreneurs who will lose their businesses. Maybe it’s the comic book store on the corner that was just barely making it, or maybe it’s the cigar shop that gets pushed off the cliff. The weaker businesses will get cleared out, and there will be more opportunities for investors or entrepreneurs who are looking to capitalize on the shift in the market.

The two greatest characteristics that entrepreneurs need to have to make it through the next year or two as we navigate the pandemic are grit and resilience. It’s taken Bob years to settle on a business model that yields the kind of profit spreads he currently enjoys, and he failed several times before he landed on buying notes. If you’re looking for a better business model, now is the perfect time to move into something new.

Over the last 10 years, I’ve seen a lot of investors get fat and happy. It was easy to make money when everything was always headed up. It’s time to get lean, and be brutally honest with your team. Let go of your low performers and sell off your properties that aren’t providing the cash flow that you need to make it through a recession.

If you surround yourself with other people who are part of an upbeat, positive, entrepreneurial culture, then you’re going to be able to navigate the next couple of years. And keep an eye out for an opportunity like buying mortgage notes; it takes most entrepreneurs a few failures before they land on the real estate strategy that really works for them.