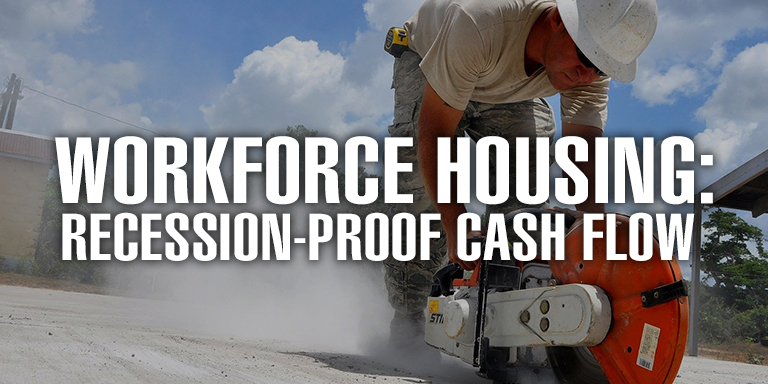 There’s been a big focus by a lot of housing developers to go after the Gen Z market by building up studios or one-bedroom apartments. But real estate developer Scott Choppin took a look around and decided that that wasn’t the direction he wanted to take.

Gen Z and Millennials are the largest demographic cohorts in U.S. history, so there’s a lot of potential when you cater to this audience. On the other hand, they also carry high loads of debt and often struggle to purchase affordable homes. Scott was looking for how to serve that demographic in a way that would help his company stand out, and he realized that blue collar workers were being underserved.

Scott’s journey to workforce housing illustrates a point that I want to emphasize today. When you start out in multifamily investing, you might have an idea firmly in your mind of what you want to do. Maybe you think 2 bedroom apartments are a great fit for you because they’re so popular in your area. But I want you to see how Scott’s strategy adapted to his market because he asked himself four crucial questions:

HOW TO FIND A MULTIFAMILY STRATEGY

Starting out, Scott had just purchased some land in downtown Long Beach, but zoning limited his unit count. To work around that, he thought he’d just add more bedrooms to the units he was going to build to maximize his rent. He started to increase the number of bedrooms, then added more bathrooms, and finally ended up adding a private garage.

He underwrote the urban townhomes for $2650, but when he got it to market, he found that he could charge $2950-$3250 for these 5 bed/4 bath units. Blue collar workers were getting priced out of the market in his area, so they’d started combining household expenses so that they could handle the higher price tag. Even if one adult lost a job, there were still two or three other wage-earning adults who could handle the rent.

That’s when Scott realized that he had stumbled on a better strategy than just putting up the same two-bedroom apartments that everyone else was building, and he set out to intentionally build homes to serve multi-generational middle income working families.

HOW TO SCALE A MULTIFAMILY DEVELOPMENT

Scott’s background was in real estate development, and as he put it, “Complexity is the enemy of profits in real estate.” He knew that in order to scale up the urban townhomes, he had to simplify the entire process and remove the friction from the development. He settled on one basic footprint design that he could then lay out on every building site.

Instead of breaking in a new team on every project, Scott uses the same framers, the same concrete guys, and the same subs every time. Not only does he get the chance to figure out who the best subcontractors are, he also can build a positive relationship with them as he sends them reliable work. On the flip side, the subs get to know his product better, and they’re able to do a better job pricing it out.

WHEN IT’S TIME TO KILL A DEAL

Optimism can sink a project, and that’s why Scott prefers going in with his eyes wide open. With any project, there might be a 100 variables. For maybe half of those variables, you can get good assessments or research that tell you how much the project’s going to cost. For those other 50 variables, it’s only when you’re well into a project that you realize you might need to adjust your numbers. Instead of always trying to jam numbers into a spreadsheet to make the project work, Scott is more cautious about having a project get tanked by unknown variables like zoning or entitlement processes.

I like to approach a deal backwards. I start looking at ways that I can potentially kill it, and if it just won’t die, then it’s got legs potentially. Just because I have capital or investors isn’t enough of a reason to sink my money into something. I want reliable deal flow because if something like Coronavirus hits, I don’t want to get bitten by a bad deal that can only work when everything is going perfectly.

WORKFORCE HOUSING IS A SOLID INVESTMENT THROUGH A RECESSION

Many of the middle class workers that like these urban townhomes live defensively. Maybe they’ve experienced job losses, they’re in a HCOL like California, or their wages have remained stagnant. Either way, even before COVID-19, they were choosing to consolidate their living expenses so that a job loss wouldn’t hit their household quite as hard.

Scott’s workforce housing has five bedrooms, but more importantly, it has four bathrooms. There is room for more than one family unit within the home. In an expanding economy, C-class tenants will move up to B-class housing. In a recession, A-class tenants will downsize into a place like Scott’s townhomes. His workforce housing sits right in that perfect band that lets the economy expand and contract around him while he continues to stay in demand.

Don’t get married to a strategy. Your multifamily strategy needs to fill a niche that’s being ignored, and when you can shift your business plans to reach that market, you’re going to be able to weather any storm, even a crazy one like COVID-19.

When I buy multifamily housing, I’m buying it for life. That means the numbers have to work from the get-go. They can’t work only when the economy’s going well. Aiming for that middle B-class zone helps me deliver reliable returns to my investors, and solid cash flow for my real estate portfolio.