From Least Likely to Succeed to Mortgage Lending Mogul 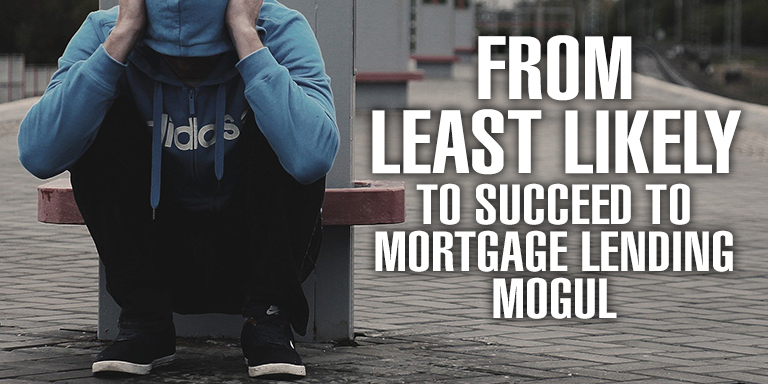 I love hearing about how people overcome an adverse environment and rise above their circumstances with hard work. My father filed for bankruptcy when I was in fourth grade, and I was raised in a 1300 square foot house with a half-finished basement. Today I credit a lot of my success to my humble beginnings that really instilled that drive to succeed.

I’m bringing Angelo Christian’s story to you because I want you to be inspired by how hard he worked to overcome his childhood. He was raised by a blue-collar worker who moved from job to job. His parents never owned a home, and in fact were evicted from every house they ever lived in. He was bullied and beat up, and he turned to food to comfort himself.

Most of Angelo’s home life centered around food instead of goals, jobs, or education. So it shouldn’t come as a surprise that by the time he was in sixth grade, he dropped out of school. By the time he’d reached this point he was discouraged and unhappy, and he weighed nearly 400 pounds.

INSPIRE YOURSELF TO CHANGE

The seeds of change for Angelo were planted when he was young, but they didn’t bloom until he was a young adult. His favorite movie was Rocky because he loved the story of an underdog beating Apollo and becoming the champion of the world. The movie gave him hope that his past didn’t have to equal his future and that he could turn things around with the same kind of work that Rocky put in.

Angelo started by exercising and getting into bodybuilding. He lost over two hundred pounds, and then he decided to go back to school and study. When he was in school as a child, he couldn’t stand reading, but now with a renewed determination to change his future, he started reading everything. He read everything from the sciences to biographies.

By studying some of his heroes like Jeff Bezos, Elon Musk, and Anthony Robbins he wanted to create a new version of himself. Angelo really believes that there’s a higher version of everyone, but people have to learn to tap into the limitless potential that exists within themselves.

I had a friend tell me a while that food is fuel for the body and fear is fuel for the mind. You can channel that fear into physical energy when you take some time to sit down and reflect on where you’re at and where you want to go. Angelo does this by practicing transcendental meditation weekly.

For a couple of hours every Saturday and Sunday, Angelo spends some quiet time in the dark just meditating to reflect on his past or foresee his future. He says that it’s because he believes that pain plus reflection is what equals progress. Just spending some time thinking gives him a chance to channel his energy and emotions into his goals.

If you want to own a multi-million dollar pipeline like Angelo, but you think that you don’t have the right traits to handle the pressure, then you can retrain yourself. Angelo’s taken the lessons he’s learned about how to improve himself and turned it into a system to help his employees change. In turn, that’s helping him scale his business to the next level.

INSPIRE OTHERS TO CHANGE

Angelo was shy as a child, so for a decade he avoided other people. But today he wants you to know that relationships and networking are the key to his success. It’s not who you are or what you know, it’s who you know, he says. You don’t need to be like every other real estate investor to be successful. You need to spend some time finding out who you are so that you can make your own trends.

When Angelo hires new employees, he wants to see from them a drive for success that will build his mortgage lending business. He’s willing to hire untrained lenders fresh out of school as long as they have:

He’s created a program that he calls Real Estate University that has thousands of hours of education for his lenders. He credits his own success to becoming a lifetime learner, and he’s created a culture at his company that inspires his employees to do the same.

In the mortgage lending industry, there’s no doubt that things got a little rocky last year when the government shut everyone down. Angelo’s company loans to both residential and commercial investors, and he’s definitely seeing some fluctuation as people’s work and home habits change. Yet he remains bullish on the ability of investors and businesses to adapt to the changes from Covid-19 and create something amazing out of adversity.

With some of his commercial clients seeing occupancy rates of 20%, Angelo is hearing stories of converting office buildings into housing or even living centers. From personal experience, he knows that no matter how much a situation looks dire, the underdog can come from behind and become the champion of the world.