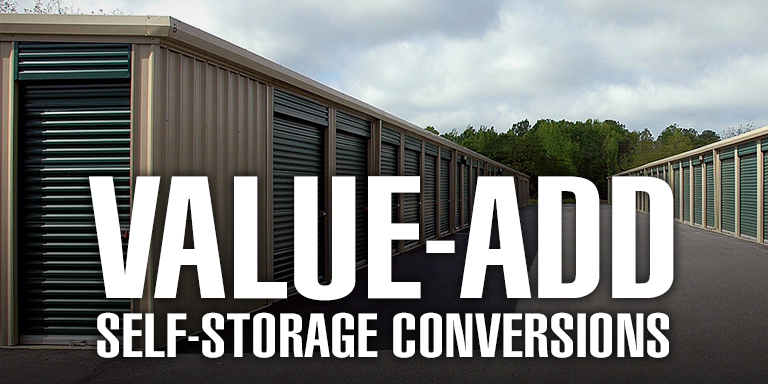 With over a $100 million dollar portfolio of cash-flowing assets, primarily in the self-storage space, AJ Osbourne can feel confident that his family will be okay if anything happens to him. But a few years ago, after he was temporarily paralyzed by Guillain Barre Syndrome, AJ realized that his income was directly related to his ability to work. Guillain Barre Syndrome, which is a rare disorder where your body’s immune system attacks your nervous system, struck him without warning, and jump started his search for passive income that would take care of his family.

I had this same realization after I was diagnosed with pancreatic cancer. My work was very transactional, and if I wasn’t selling, then I didn’t have money coming in. Getting sick or going through cancer treatment just has this effect on you where you suddenly realize that you need to own assets. You need to have money coming in from income-producing assets. That’s when I moved more aggressively into the real estate industry.

Today, AJ Osbourne owns over 8,000 self-storage units or around a million square feet space, and he also owns a commercial real estate brokerage. Even though AJ has purchased all kinds of self-storage units, his favorite kinds are the value-add units. He warns against investing in overbuilt markets, recommends finding old big-box stores to convert into new storage, and suggests that you treat self-storage more like a retail space and less like an apartment building.

AJ buys underperforming assets and turns them around, or he purchases industrial warehouses or big-box stores to convert them into storage. If he can’t get a 20% cash-on-cash return, then he won’t even consider moving forward. His strategy is extremely effective and reliable with a low risk, but he’s constantly keeping an eye on the greatest danger in the self-storage space: overbuilding.

There’s such a low barrier of entry building in the self-storage space, and the data on how much space a city needs and how much it has just isn’t that reliable. What you end up getting is a mom-and-pop type of investor who has a few acres of land and they just decided to build storage units on the property. And when you ask them why they build storage units, they say that the long-term value asset is good, plus they don’t have to deal with toilets.

In a large market, like Los Angeles, AJ can immediately access enough data to see if a city is overbuilt, or if there’s room to grow. But for a second or third tier market, there is little to no data, and that’s when AJ starts evaluating it using the tools at his disposal.

You can’t miss a self-storage facility on Google Earth, so that’s why AJ starts looking at a new market with a look at the entire city. He takes a look in a three-mile radius of wherever he wants to buy, and then he starts looking online for every self-storage unit in that area.

Once he’s identified the density of self-storage units in that three-mile radius, that’s when he calls up the city’s zoning and planning department. He wants to know:

This helps him figure out what the current market is like, and what the future market might look like. He can then determine the square foot per capita, the occupancy rate, and the demand for the current square foot for self-storage units in that market.

If AJ finds a self-storage unit to buy that’s being run well, but it can’t get above 80% occupancy rate, that’s an immediate red flag that the area is overbuilt. In addition to paying attention to the market’s current and future units, he’s also narrowed down his buying criteria to:

About 70% of all self-storage units are owned by mom-and-pop investors, and one of their most common mistakes is that they expect their units to just magically fill up. They don’t realize that they’re competing with the self-storage unit down the road, and they miss the opportunity to crush their competition.

Self-storage units don’t have a lease like apartments. They’re rented on a month-to-month basis. So if a tenant finds a better deal or receives a coupon in the mail, they might move their stuff to a competitor to save some money. Self-storage unit owners need to have their dynamic pricing and marketing nailed down tight. Good managers will improve the retention rate of your tenants.

But there’s also an ebb and flow to self-storage units. In the fall and winter, a lot of the tenants will move out, but the spring will be your busy season. For about four months, you’ll be steadily signing up new tenants making the majority of your year’s money. If you plan your marketing around this, you can really knock your year’s goals out of the ballpark.

AJ even takes the idea of retail space a step further by converting old Kmarts into self-storage units. The buildings are just shells, located near highways or busy retail areas, and commercial brokers are happy to unload them. Then AJ can just add value to the existing property and add another cash flowing asset to his portfolio.

AJ expects 8-12% gross revenue every year, which is why he’s so keen on getting right the purchase of self-storage units the first time. This asset class is young, and there’s a lot of potential for growth, but don’t buy without doing your due diligence on whether the market is saturated or not.