How the Invisible Foreclosure Inventory Affects the 2021 Housing Market 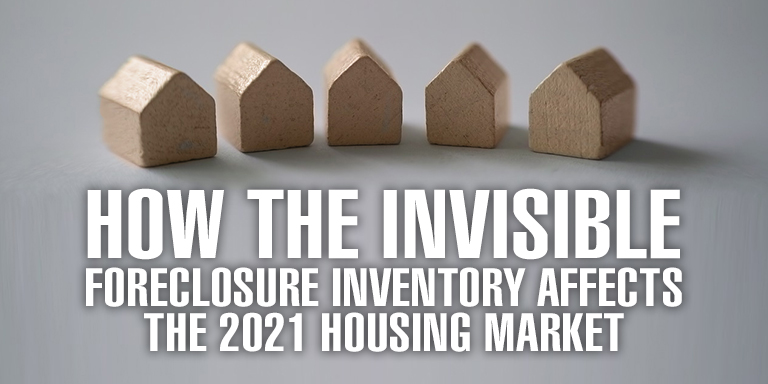 One of the benefits of talking to Daren Blomquist so often is that as the Vice President of market economics at Auction.com, he has the data on how millions of investors are acting in almost real time. He can see trends, and predict the direction that the market is headed in based on more than just hunches or social media rumors.

At some point, defaulted mortgages will have to be caught up, or they’ll go into foreclosure. We have historical data on how many homeowners can usually recover from this kind of financial disaster, so Daren talks about what we know about the foreclosure inventory, how investors are behaving, plus he gives his predictions based on the data he’s aggregated from his company’s website.

Auction.com sees about 50% of the entire country’s foreclosures come through its website, so it has a good finger on the pulse for this segment of the market. Daren says that you can see a solid line on foreclosure inventory that starts on March 13th when everything shut down last year. While vacant and abandoned buildings were still allowed by policymakers to be auctioned off, occupied buildings had their eviction proceedings frozen in time by the government’s moratorium.

Nearly overnight, the country’s inventory was suddenly at 16% of its previous numbers. As last year ground on, some of the states chose to ease up on the eviction moratorium. Surprisingly, even California started picking up again on its foreclosures, but Florida was still holding on tight to the moratorium. But foreclosure inventory still remains at a fraction of its pre-pandemic levels.

During a healthy economy, in one year there are about 150,000 completed foreclosures. That number represents both properties that are sold to investors or that go back to the bank. But right now, those foreclosures are sitting on a bank’s ledgers. As the pandemic continues, every month more foreclosures are stacking up hidden from the public’s view.

In anticipation of the day when the eviction moratorium is lifted, banks have set aside $29 billion to cover these potential losses. They’re preparing for this flood of foreclosure by clearing their balance sheets of any lingering homes so that they can be ready to process the new foreclosures. REOs on a bank’s ledgers are one of the opportunities for retail investors to purchase right now as banks might be willing to discount REOs to simply get them off their books before being forced to deal with pandemic foreclosures.

If you’re a mom-and-pop investor who averages 10-50 deals a year, Auction.com is a great platform to find institutional investors trying to clear their books to get ready for the coming tsunami of foreclosures. An institutional investor might be willing to unload some of their properties for a discount as they get ready for the future distressed properties. Since demand is still outstripping supply, using a platform where investors congregate can help you cut through the noise and find these bigger sellers faster.

Even taking the pandemic out of the investing equation, I don’t advise my students to invest in boom/bust markets like Los Angeles or Orlando. Daren and I have talked about the exodus out of big cities that was accelerated by the pandemic, and it continues to play out in where people are moving to as they leave the coasts for medium- to small-sized cities. I personally invest in the Southeast, the Midwest and the middle of the country because these markets are the most price stable with a gross rental yield that can withstand the ups and downs of the market.

Daren is seeing two different approaches from investors depending on how exposed they are to risk. For buy-and-hold investors who are in it for the long hold, they indicated that they have no intention to slow down on acquiring properties. For flip and fix investors who are more exposed, they’ve started to slow down on their purchasing. If they have 30 houses under some stage of rehab, and the market starts to crumble, you can understand why they’d be nervous about that kind of exposure.

We are so lucky that we have data aggregation sites like Auction.com. In 2006-2008 we were flying blind with no way to tell how bad things were. We’re also lucky that we have some precedents built into our policy. We’ve seen how policies could be rewritten to help homeowners going through a natural disaster after the 2017 hurricane season in New Jersey. And we’ve seen how a nationwide man-made housing crash should be dealt with after the Great Recession.

But we’re also in uncharted waters too. We don’t know how long the foreclosure moratorium will last, or what the unemployment rate will look like, or even when things will get back to some semblance of normal. Daren has some good guesses based on past data, current trends, and regression models he’s run on different scenarios.

In the past, 20% of homeowners who went into forbearance have had to go into some type of loan modification because they couldn’t catch up on their payments. Daren points out that during the last major loan modification event, 24% of homeowners re-defaulted within two years, and 45% re-defaulted within five years. From Daren’s conservative estimates, we’ll only see default rates 35-40% of the numbers we saw during the Great Recession. That roughly pencils out to 575,000-625,000 foreclosures that are going to happen over the next two years.

Here’s what I recommend you do to get ready for this wave of foreclosures: Sell all of the fix and flips that you have. Fix them up and sell them while inventory is still low. Keep your powder dry, and if you have private money, hang on to it.

I do think there’s still going to be a lack of supply even with this massive inventory headed our way, but if you have ready cash, you’ll be able to pounce on these opportunities when they show up in 2021-2022. If you’re a cash flow investor like me, this is the perfect time to buy low and hold forever as you build up your portfolio.

P.S. If you’re ready to take the next step and invest passively in our deals, head on over to FreelandVentures.com/passive.